We love living a vintage-inspired lifestyle every day of the year. Sometimes, we even go hardcore vintage lifestyle. At those times we want to wear vintage, eat vintage (recipes), watch vintage (movies), make vintage (crafts), and listen (to) vintage (music). And we’ve found that some of the best sources for authentic guidance in the vintage lifestyle are publications from Bramcost. Covering every era from the 1800s to the 1960s, Bramcost Publications specializes in reprinting vintage materials. They offer a wide range of topics but many of their titles cover sewing, crocheting, knitting, and hairstyling of decades past.

Want to really feel like you are a Victorian beauty? Try Manual of Ladies Hairdressing for Students – Over 35 Authentic Victorian Hairstyles With Instructions by A. Mallemont. 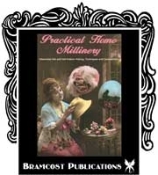 Have you been watching too much Mr. Selfridge (as seen on PBS – see earlier post)? Feeling the need to make your own Edwardian hat? You really must read Practical Home Millinery — Edwardian Hat and Veil

Pattern Making, Techniques and Construction by Amy Reeve. Although, some of us just love the romanticism of Hope Chest — Vintage Wedding Guide to Preparing a Bridal Trousseau by Royal Society.

Our favorite, when we’re in a 1930s mood, is Make-Up — 1930s Beauty Instruction and Technique by Virginia Vincent.

Feeling like the 40s? Beauty, Glamour & Personality — A Complete 1940s Guide to Vintage Makeup, Hairstyling and Elegance by Ern and Bud Westmore gets rave reviews from most web sites (Don’t believe us? Check out what people have to say on Amazon.com.)

If the 50s are more your style, then the Westmore’s also wrote the Westmore Beauty Book — A Complete 1950s Guide to Vintage Makeup, Hairstyling and Beauty Techniquesby Bud, Perc, Frank, Mont and Wally Westmore.
The best part: they have a blog focused on vintage tidbits, recipes, and free vintage patterns for crochet, sewing, and hairstyling. Talk about a delightful and fun-filled hodgepodge of vintage info! Although it’s currently on hiatus, they plan to revive the blog with all sorts of new posts in the fall. In the meantime, catch up on all of their previous posts. One of our favorites is the recipe for Stuffed Frankfurters from 1937.
What are your favorite vintage crafts or hobbies?

We here at Pink Champagne & Pearls are big fans of Downton Abbey and are eagerly anticipating season three.  In honor of that we will present our “Countdown to Downton” series in the weeks leading up to the January 6th premier.

38 days until the premier!

Mrs. Patmore, in the kitchen, with the knife

I’ve been pining away these past months, suffering from Downton Abbey withdrawals. Imagine my joy then to receive my Downton Abbey inspired cookbook and pretend I was living the life of a Crawley sister, complete with my own Carson and a full retinue of servants catering to all my needs.  Well, okay, the cookbook didn’t come with all that.  A girl can dream though.

The book is cleverly divided into two sections, the first part being “Dining with the Crawleys” and the second being “Sustenance for the staff”.  For the wealthy class at this time meals were an important part of their society and daily rituals.  Meals were a work of art steeped in tradition.  As you would imagine the recipes featured in the upstairs portion are decadent and fancy, the type of meals you would expect to be served by liveried servants with white gloves.  The downstairs section by contrast is full of hearty and traditional English dishes.  Meals that would give you energy for a full day of honest work.

In either case the food is delicious and it’s entertaining to try out some new dishes, many of which are not the normal fare for the average American.  Below is a sample of the recipes you’ll find within this cookbook.

Upstairs Recipes:
~ Potatoes with Caviar and Creme Fraiche
~ Crab Canapes
~ Seafood Crepes
~ Leg of Lamb
~ Roast Duck with Blackberry Sauce
Downstairs Recipes:
~ Guinness Corned Beef
~ Bangers and Mash
~ Mutton Stew
~ Treacle Tart
My experiences with the recipes thus far has been very positive.  I made “Mr. Bate’s Chicken and Mushroom Pie” (a creamy gravy with chicken, mushrooms and peas under a flaky, buttery crust) and “Mixed Berry Scones” (super moist, fluffy scones bursting with strawberries, blueberries, raspberries and blackberries).  I took the scones to work and they were a big hit with my coworkers.  Due to the moisture in the berries the scones come out with more of a muffin consistency than the common dense consistency of the scones most of us are used to.
My main complaint with this book though would be the absence of pictures.  It’s a small thing but I do so love to look at those perfectly styled treats found in most cookbooks.  All in all though I would definitely recommend to all fans of Downton Abbey whether they be pros or novices in the kitchen.
Follow Pink Champagne & Pearls on WordPress.com