Due to several weeks of business trips, sickness in both houses and endless work we were seriously over due for a BFF date. Luckily TCM and Fathom Events came to the rescue with the 75th anniversary screening of The Maltese Falcon starring Humphrey Bogart and Mary Astor. This has long been one of my favorite film noir detective movies. It’s got all the classic twists and turns of a great mystery played by an all star cast.

The Maltese Falcon (1941) – A private detective takes on a case that involves him with three eccentric criminals, a gorgeous liar, and their quest for a priceless statuette.

I don’t want to spoil the plot for anyone who hasn’t seen it so I won’t go into details. Suffice it to say be prepared for misdirection, double crosses and lots of pithy one liners. An all around good time.

Some interesting trivia we learned regarding the film:

I would highly recommend catching this film in the theaters if you can. Encore showings are this Wednesday, February 24th. Get all the details on Fathom Events.

And just for fun, here we are doing our best serious, brooding, film noir faces. Clearly we need a little more practice. 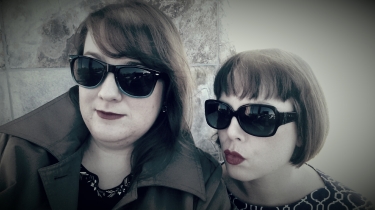 **Please don’t keep reading if you are trying to avoid spoilers. (Though what is the statute of limitations on spoilers? I feel like we need a ruling here.)

I couldn’t help mentioning that in my opinion this movie delivers one of the best last lines, delivered by the cynical yet lovable PI, Sam Spade. In fact it came in #14 on the American Film Institute’s Top 100 Movie Quotes of All Time list.